April 3, 2018 Strategic Storytelling. How to tell your story

Between 1931 and 1968, Walt Disney won 32 Academy Awards and still holds the record for most individual Academy Awards won.  Walt was known for pushing the envelope in storytelling and making animation an entertainment for both children and adults.

The storyboards that were created by Disney artists were more than just good artwork, they served another special purpose.  Walt used his storyboards to tell his story to his artists.  He used voices and body gestures to act out the whole story as it appeared on the storyboard.

You might be thinking, okay that sounds good, but I’m not making a movie or animation.  True, but you are telling a story and  digital storytelling  opens up a multitude of digital multimedia choices.  But it all starts with the storyboard.

A storyboard is a pre-production map showing your story beginning, middle and ending.  Steven Spielberg is known as being a great storyteller.  All you have to do is see any of his movies from E.T. to Jurassic Park.  Spielberg even has his storyboards out on location so that he can prepare and direct his shots.

As I stated in yesterday’s blog, a storyboard is like a cartoon strip showing a quick shot of a scene, its action, dialog, and what music or sound effects are going on.

Here is a simple student’s storyboard.  You can follow the story as you work through each frame from 1 – 14.

Putting these image together creates the story in action.  Like below.

You can draw your own storyboard or pick up a template like the one above online.

To learn how a storyboard works study this 30-second commercial.

This 30-second commercial has only four scenes.  Sometimes it helps to turn off the sound and just watch the visual action.  What’s the message?

The message is water is essential for your health.  The majority of the commercial is on a young male who appears to quenching his thirst after a workout.  The commercial ends with a bottle of water.  This commercial does not sponsor any particular water company.

A storyboard is absolutely necessary if you want to make a good digital story.  A storyboard helps in the post-production stage; making sure the images have continuity; deciding which music selection best works;  if any sound effect needs to be added; choosing the best text font to communicate the story’s theme; and making sure your message is clear.

Every image must be able to tell the story without the help of words or sound.  Remember a good story is passed on while a poor story is passed by.  What changes would you make in the above water commercial?  Which image needs to be changed to drive the point that power drinks and sodas are not helping the body to quench its thirst?

Tomorrow and the next few days, we will discuss Timing in regards to how long each scene should be, and the supporting actors like color, music, and sound effects choices.  If you have any questions send me an email.

When Branding, it is important that you deliver one simple message.  That message must be clear and carry emotion.  As any stand-up comedian will testify to, humor is a hard topic to develop.  As a comic, you are constantly trying to figure out what will make the audience laugh.  Audience mood, subject matter, timing, and occasion are all elements in preparing humor.

On the other hand, you would think human emotion would be more straight forward.  However, humor also has, like in law, a statute of limitations.  A good example is William Shakespeare’s, “Merchant of Venice.”  In the court scene, Shylock, a Jew, will lose his fortune and must convert to Christianity.  Today, when this scene is played out, there is sadness; however, 500 years ago, the audience was belly laughing at this scene.

There are still some forms of humor that maintain, like slapstick, a more physical humor that has been played out for centuries.  Humor based on a play of words can be dated as the meaning of the words or expression change in time.  Whereas, a single tear, still has the emotional response expected.

Generational family topics can be moving like the following video.  No words needed to be spoken and you understand what the company is branding.

This is another military topic where generations having shared similar ordeals and threats meet in an unlikely location.  This video also shows that sex and race are not a criteria for anyone who has served in the armed services.

Did you note that both videos use a single piano to set the emotional tone?   Music can set the tone and mood for the response expected.  Music is a powerful emotional element to add to any video.  Music must be chosen on how you want the audience to react and experience, not what you like.

In the Food City video, when the young man starts to walk up to the house his face is bright and happy as he looks around, then he sees the older soldier dressed up in his full-dress uniform.  The young man’s face slowly changes to a more respectful serious look, dropping his bag, as he moves slowly towards the older solder.  The witness to all of this is one woman who turns to see the two solders meet.  The embrace of the soldiers is the signal for all to encircle the two soldiers and it ends.

In the American Airlines, a young black female dressed in camouflage fatigues is asked to board first.  The room is crowded, but there are older men who take special attention to this young soldier as she walks forward.  She walks between a row of people but spots one older man who has stood at attention  presenting her a salute.  She humbly acknowledges it with a shy smile and a nod.  The narrator’s words are unnecessary,  the message is clear.

The piano is a string instrument.  How would an acoustic guitar change the mood in these videos?

Strategic Stories can be transmitted through a variety of presentation formats.  Today, we will look at Story Branding.  You find this format mostly on Websites to Social Media.  Digital Storytelling should be kept at the 1 – 3-minute mark, beyond three minutes takes more creativity to keep the viewer to the end.

Patek Philippe’s one minute commercial creates both the brand and image by using visual metaphors.  The black and white photography creates an air of sophistication and drama.  The video highlights five major cities that represent the five major UTC Time Zones.   Each time zone is equal to 10-seconds of video time.  In each of the five segments an adult is wearing a Patek Philippe watch, and the adult is always paired with a son or daughter image.   The last ten seconds explains the whole message: “You never actually own a Patek Philippe, you merely look after it for the next generation.”  This is more than just a watch to tell time, it is an investment in technology and fine art.  The music is soft, classical, and subtle.   It ends with, “Begin your own tradition.”  The Brand is set like a museum piece of fine art and the whole video plays into this concept.

The second commercial says absolutely nothing about the product, “Red Bull Stratos.”  The video was edited down to 1:30 minutes.   It is the historical documented highest free-fall jump ever done—24 miles in altitude.  The video went viral and has been seen more than 41,500,000 million times. The only brand icon visible was on top of the parachute.  Brilliant!  Red Bull, in the past has spent over $75 million per year advertising and marketing its product in the U.S.  However, the viral video, “Red Bull Stratos,” rose sales 17% to $1.6 billion dollars in the United States. Globally the company sold 5.2 billion cans, which was a 13% increase.  Red Bull’s slogan: ‘Red Bull gives you wings’.

Storytelling Branding has a beginning, middle, and end.  It differs from Strategic Storytelling, which is more of a persuasive argument.  The purpose of branding is to identify your product-service customer’s values.  If done correctly, the story will do most of the work.  Story Branding must build trust, confidence, and inspire emotion.  Without the emotional element, the story will end when the video ends.  Shut the sound off and see the video again, and then think about what Alfred Hitchcock once told his apprentice.  He said, “Even if they shut off the sound to my movies, the images will still deliver the message and emotions.”  This is good advice when developing your video storyboard.

Images must convey meaning through their actions and expected emotional response.  Background music should never over power, but act more as a supporting actor.  The story must lead the viewer to a conclusion on your Brand’s strength: Trust, Confidence, Reliability, or Leadership.  Which of these two videos would you use as your branding template?

They say a picture is worth a thousand words, which might be true, if interpreted correctly!

When I have shown this painting called, “The Wedding of Arnolfini,” by Jan van Eyck, (1434), to my students and would ask what is this painting about?  What’s the story behind it?  Several students would reply that this is a shot-gun marriage because the woman is pregnant.

First, the woman was not pregnant.  In fact, she never would have any children.  It was painted in with the hope she would bear children.  The dog is a symbol of fidelity, the shoes on the floor, the mirror, rosary on the wall, a lit candle above them all indicate symbols of marriage that took place legally in a church with all its blessings–This is a 15th Century Marriage Certificate. 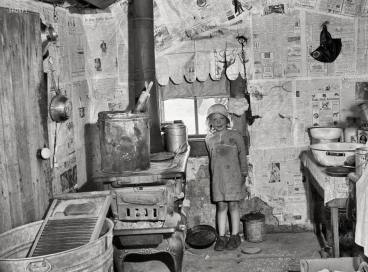 Now, What about the picture to the right?  What are your initial thoughts?  What impressions and emotions are you feeling?  Do you think you have the story down?

What objects can you identify?  What do the objects in the picture tell you?  Every object in this picture has a story to tell, if you can remove yourself from 21st Century prejudices and bias.

When I talk of prejudices and bias I’m not talking about race but cultural boundaries that separate us through time.

I found this picture on a Facebook page that hosts old photos.  The question on this photo was, “What can we learn from the little girl who lives in a cabin with newspaper as wall coverings and smiles?”  “Why does she smile considering her living conditions?

When I did my research, I found out that the picture was made by Carl Mydans in 1936.  Carl Mydans was a photographer who documented the depression years.

The newspaper was valuable because that zeroed in where this little girl lived.  She lived in the Ozarks of Missouri.  The nearest town newspaper was the, “St. Clair County Republic.”  The newspaper indicates ads for the New Year.  So, this was probably either a December 1935 or January 1936 newspaper. The cabin has no running water or electricity.  The stove is the main source for cooking and heating.  There is a kerosene can next to her.  I would expect the bed to be behind the photographer.

It is true that a picture is worth a thousand words, but I have chosen to write only 500 words\blog.  A photograph, on the other hand, has many stories to tell, which are frozen in time for eternity, in a fraction of a second, in a person’s life.

Sherlock Holmes once said, “The world is full of obvious things which nobody by any chance ever observes.”  In this 1936 picture, the initial question was, “Why is this poor little girl smiling?”  Of all the objects in the picture, the one obvious thing that would make this little girl smile is a new pair of shoes.  Compared to the little girl’s hat and dress, the shoes show no wear or dirt.  Observe the obvious.